Steel pans (steel drums)were created on the Caribbean island of Trinidad in the 1930s, but steel pan history can be traced back to the enslaved Africans who were brought to the islands during the 1700s.  They carried with them elements of their African culture including the playing of hand drums. These drums became the main percussion instruments in the annual Trinidadian carnival festivities.  In 1877, the ruling British government banned the playing of drums in an effort to suppress aspects of Carnival which were considered offensive. Bamboo stamping tubes were used to replace the hand drums as they produced sounds comparable to the hand drum when they were pounded on the ground.

These early metal pan bands were a rustic combination of a wide variety of metallic containers and kitchen utensils that were struck with open hands, fists or sticks.

The metal pan players discovered that the raised areas of the metal containers made a different sound to those areas that were flat. Through experimentation, coincidence, trial and error, and ingenuity on the part of numerous innovators, the metal pan bands evolved into the steel pan family of instruments.   As the pan makers’ knowledge and technique improved, so did the sound of the instrument.

Several innovators throughout steel pan history have made significant contributions to the development of the instrument. Winston ‘Spree’ Simon – is credited with creating the first ‘melody pan’ which carried eight pitches. This was the first pan that could accommodate an entire melody.   Ellie Mannette – is credited with being the first to wrap the playing sticks with rubber (which softened the attack and produced a more refined tone).  He was also the first to sink the surface of a pan into its now characteristic concave shape (this allowed for more pitches to be placed on the playing surface).

Anthony Williams – is credited with inventing the ‘spider web pan’ which was designed in a cycle of fourths and fifths. (Pans with intervallic formulas are easier to tune and produce a higher quality sound). This layout is now the most popular and accepted design for tenor (lead) pans.

Mr. Williams is also credited with being one of the first in steel pan history to use large 55-gallon drums as starting material for the pans, a tradition that continues to this day.

Bertie Marshall – credited with inventing the double tenor pan. He also recognized the negative effects the sun had on steel pan and was the first to place canopies over the instruments when they were played outdoors. LIMITATIONS OF THE STEEL PAN

Despite the achievements and hard work of the innovators, modern-day steel pans still have a few limitations.  Most have a limited range compared to other instruments (approximately 11/2 octaves).  The highest notes of the frontline pans do not sound as well as the lower notes.

The bass pans are large, difficult to transport, and take up a lot of space

Some musical effects such as staccato (a detached style of playing) are difficult to achieve on the steelpan.

Steelpan is a work in progress. Pan makers around the world are constantly investigating ways to improve and refine the instrument.

When steel pans first emerged in the 1930’s they were not taken seriously. The instruments and their creators were looked down on by the upper class of Trinidad society because they were made and played by persons from the ghettos.

Also, criminal elements had an unfortunate love of steel band music. Performances of rival bands often ended in violence and steel pans were considered the instruments of hooligans!

Time and exposure eventually eroded this stigma and the steel pan is now the national instrument of the Republic of Trinidad and Tobago and a source of great pride for its citizens. Steelpan and its innovators are now held in high regard by persons of all levels of society in Trinidad and Tobago. 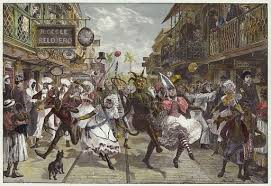 CARNIVAL IN TRINIDAD: CELEBRATE THE CARIBBEAN WAY A BLAZE OF COLOUR, COSTUME ART AND A GREAT PARADE - THE HIGHLIGHTS Known as the biggest street party on Earth- Trinidad and Tobago’s Carnival is officially celebrated on the Monday and Tuesday before Ash Wednesday every year. The Carnival festivities start just after Christmas and continues until Ash Wednesday-loaded with dozens of high energy parties and premier cultural competitions. Carnival Monday opens […]